Troop Presents Thanks to Council 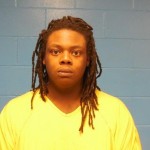 High Speed Chase- A search that began in Goodhue County, ended with a high speed chase across the river in Pierce County, Wisconsin, where the 26 year old man suspected of shooting D’Angelo Masterjohn was finally taken into custody. Charles Deonta Jones has now been charged with 2 counts of second-degree murder, one count of third degree murder and 2 counts of second degree manslaughter in the Tuesday morning shooting that left Masterjohn dying on a Red Wing street. Police in Pierce county attempted to stop Jones for driving through a stop sign at the intersection of Hwy 35 and 63. The vehicle driven by Jones attempted to outrun the squad reaching a spead of nearly 115 miles per hour. The car then went into a ditch at 750th Street near Ellsworth, barely missing a home as he drove thru the yard. Jones then bailed out of the car and ran into wooded property after brandishing a pistol. He did surrender to authorities and is in custody at the Pierce County Jail in Ellsworth. A search of the wooded area reavealed a loaded 9 millimeter handgun.

Permanent link to this article: https://kdwa.com/2017/04/masterjohn-shooting-suspect-captured/