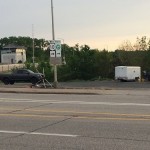 The Prescott City Council met on Monday July 8th. One of the items on the agenda was to accept a draft and final version of a Request For Proposal packet to distribute to the public who may wish to develop business projects in Prescott. The RFP plan was explained by Cedar Corp representative Seth Hudson, who pointed to 3 sizeable privately held land parcels as well as one city owned are in downtown that could be developed if the right project was presented. Hudson, himself a former developer, made a point to clarify that the intent is not chose one developer over others but merely to set formal perameters for all potential developers.
It is also possible, he said, that none of the proposals would be the right fit, but economic development is a priority for the city at this time. One of the areas, the corner of Broad Street and Hwy 10 at the entrance of town, is privately owned by Riverboat Properties, LLC, and represented since December of 2015, by businessman Bob Campbell. That property, overgrown and obscured by weeds, brush and rogue vegetation, has sat vacant since the razing of Cabanna Joes at a cost to the city of $25,000. Hudson was asked Monday about a comment made referrencing the small amount of foundation remaining at the site. He confirmed that footings and a partial wall were left so that proximity to the riverfront would remain for any future structure, grandfathered in although current standards would not allow building that close to the water’s edge.
The RFP’s will be accepted until October at which time they will be considered by the council for a possible next step. After the meeting, KDWA requested a comment from the city, asking Brand why Riverboat Properties have not been required to maintain this parcel according to city ordinances regarding weeds and mowing which has been a near constant complaint for residents of the city . We were told that the city intends to revisit that 31/2 year old conversation ahead of the release of the RFP packet.

Permanent link to this article: https://kdwa.com/2019/07/prescott-council-offers-economic-opportunity/