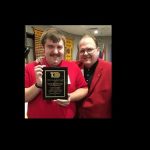 The Optimist Club of West St. Paul has named 2013 Hastings High School graduate Cole Spavin as its next president, during a ceremony on October 7th. According to a published report Spavin received his gavel from the previous president, John Rheinberger, who is now the District Lt. Governor. Spavin became a member of the Optimist Club in 2013, and has held several positions with the organization.

Permanent link to this article: https://kdwa.com/2020/10/hastings-alum-named-optimist-chapter-president/