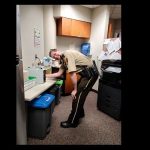 The Washington County Sheriff’s Office announces that Doug Anschutz has been named the new Chief Deputy. Anschutz started his law enforcement career in 1987 as a Military Police Officer in the United States Marine Corps, serving as a member of the security team that protected Marine One. He joined the Sheriff’s Office in 1996, and has been a patrol deputy, K9 handler, DARE instructor, patrol sergeant, commander, and now chief deputy. Chief Deputy Anschutz replaces Brian Mueller who was recently named the Stillwater Chief of Police.

Permanent link to this article: https://kdwa.com/2021/01/anschutz-named-wcso-deputy-chief/