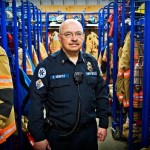 On Tuesday, Flint Hills Resources Pine Bend refinery announced the retirement of its long-time fire chief Pete Herpst, who is stepping down after being a key part of the refinerys fire department for more than 25 years. The military veteran, handyman, and longtime volunteer firefighter joined the Pine Bend team in 1990. He managed a crew of 132 individuals, including 87 volunteers, who keep the refinery safe for its workforce and onsite contractors as well as assist local municipalities in responding to incidents. In addition, the Pine Bend refinery fire department provides free training sessions for firefighters from across the Midwest. Herpst is known at Flint Hills for his commitment to training future generations of firefighters. Throughout his career, he regularly hosted firefighters from stations of all sizes to practice extinguishing fires, defensive cooling, and teamwork exercises. Herpst will be replaced by veteran Flint Hills employee Ed Steele, who has worked at the Pine Bend refinery for nearly 20 years. Steele has worked in a variety of roles during his career at Pine Bend, including Production Specialist, Shift Safety, and Fire Department Battalion Chief.Photo courtesy of Flint Hills Resources.

Permanent link to this article: https://kdwa.com/2017/02/pine-bend-fire-chief-retires/