Raider Baseball Benched Due To Virus 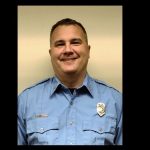 The City of Hastings has announced the promotion of Captain Chris Paulson to the Assistant Fire Chief position with the Hastings Fire Department, effective April 12. According to a City press release, Paulson has 23 years of experience in fire and EMS, including 11 years as a training officer, five years on the Dakota County Special Operations Team, and the past five years in a supervisory role as Captain. During the past couple of years especially, Chris has played an integral role in Hastings Fire Department leadership as the Department updated its standard operating procedures, staffing and response models, and plans. The City received 15 applications for the Assistant Fire Chief position and interviewed three candidates. There were two interview panels with representation from Fire Department leadership, full-time and paid-on-call firefighters, Police and Administration leadership, Public Safety Advisory Commission (PSAC) members, and a neighboring Fire Department.

Permanent link to this article: https://kdwa.com/2021/04/paulson-named-assistant-fire-chief/