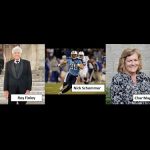 The Prescott School District has announced its Hall of Fame inductees for 2021. Roy Finley enters the Hall of Fame as a fierce supporter and promoter of Prescott. Having served in France during World War II, Roy believed in supporting his community, which he continued to do throughout his life. He served two terms as Prescott’s mayor and volunteered on the Prescott Fire Department, where he served as chief. Char Magee enters the Hall of Fame as a passionate volunteer, leader, and advocate who dedicated countless hours to projects and organizations that shaped Prescott into an even better place to live. The driving force behind Char’s decades of involvement is her belief that a healthy community is a strong community. And Nick Schommer enters the Hall of Fame based on his unprecedented athletic accomplishments. Schommer was the first Prescott High School student-athlete to receive a full Division 1 scholarship, where he was a standout player for the North Dakota State Bison Football Team. After a phenomenal college career, Schommer became the first Prescott Cardinal to be drafted into the National Football League when he was drafted in the 7th round by the Tennessee Titans of the 2009 NFL Draft. The inductees will be honored at the Fourth Annual Hall of Fame Banquet in the Prescott High School Commons on Saturday, Oct. 9th. Doors will open at 6 p.m., dinner will be served at 6:30 p.m. and the induction program will commence at 7 p.m. Tickets to the event are $25 and will be available for purchase at the Prescott High School, City Hall and other community locations.

Permanent link to this article: https://kdwa.com/2021/09/prescott-hof-inductees-named/