After giving up a 2 goal lead, the Hastings Raiders responded with a thrilling overtime winner to stay perfect in section play and secure a 3-2 win.

Hastings had to go with some different lineups due to injury, and Carter Simpson and Sawyer Tjomsland got to again see some extended varsity minutes. That was especially important, as at 7:31 of the 1st period, Carter Simpson found the back of the net for his first varsity goal, with assists from Harris and Iovino. It would stay 1-0 for the rest of the period, but not long after the intermission, Hastings made it 2-0 when their power play unit continued to thrive, as Connor Zgoda found the back of the net on an assist from Eddie Peine and Blake Vandehoef and the Raiders had complete control of the game. The goal mere seconds into a power play, almost directly off the faceoff.

And then Owatonna reversed their fortunes, scoring twice in the span of five minutes to tie the game at 2. The Raiders went into the third needing a spark, but neither team was playing all that well in the period, with both teams trying to feel the other out. In the later stages of the period, the action picked up. Owatonna had a shot in the final seconds that they thought went in, and their fans celebrated… but play continued, as the officials said it only hit the post and not the back of the net, and the score remained 2-2.So to overtime we went.

In overtime, it was evenly played, and Hastings would have a few more chances than Owatonna, and that was all that mattered. It was Zgoda again, burying one past the Huskies netminder to give Hastings a pivotal 3-2 win. That goal also came on a power play, and it was Peine and Vandehoef who contributed on the assists again.

The Raiders improved their special teams units again, killing off both penalties and scoring twice on five power plays. They have a pivotal section game against Farmington on Monday before a big one with Saint Thomas Academy on Tuesday and Two Rivers on Thursday. A very important section game looms large against Lakeville North on January 31, and you can count on KDWA to bring you all the action. 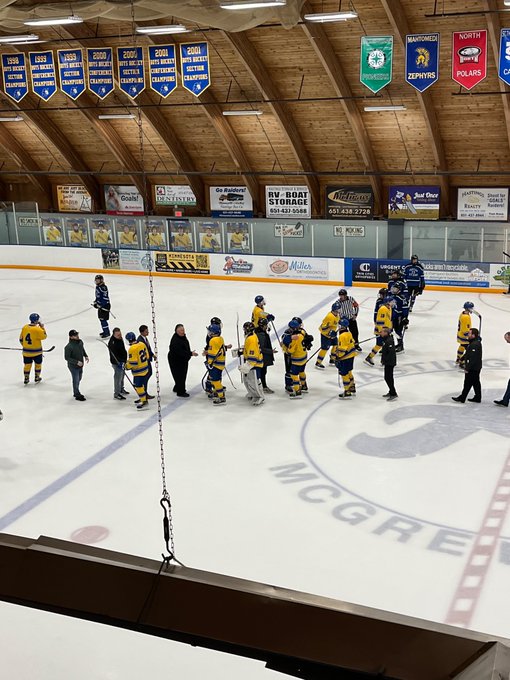 Permanent link to this article: https://kdwa.com/2023/01/raiders-hold-off-owatonna-in-overtime-thriller/