The Rosemount Police Department officially welcomed two new officers at a swearing-in ceremony held in early January. According to a press release, Anis Ahmetovic and Ashley Rosel raised their right hands to take the oath of office, and are now fully-fledged officers after spending a year on probation with the Department. Ahmetovic was born in the Netherlands and has dual citizenship in the Netherlands and the United States. Growing up in Lakeville, he attended Lakeville North High School and went on to Metropolitan State University to complete his bachelor’s degree in law enforcement. Rosel was born and raised in Rosemount and attended Rosemount High School. She went to college at Fond Du Lac Tribal and Community College where she obtained her associate of science degree in law enforcement as well as her associates of applied science in criminal justice. She is currently working on her bachelor’s degree online at Liberty University. 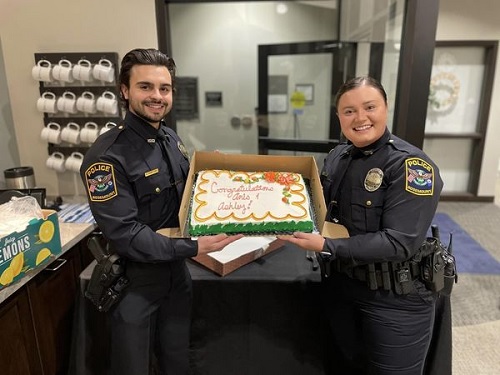 Permanent link to this article: https://kdwa.com/2023/01/rpd-swears-in-two-officers/