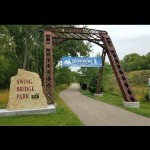 As part of last weekend’s Inver Grove Heights Days, Dakota County recognized the 125th anniversary of the Rock Island Swing Bridge, a historic structure that once spanned the Mississippi River from Inver Grove Heights to St. Paul Park, linking Dakota and Washington counties. What once served railroads and early 20th century industry along the river now serves as a popular recreational attraction for walkers and cyclists in search of river views. According to a press release, the bridge was completed in 1895 and opened first to wagons and trains, providing an important connection between stockyards in South St. Paul and main rail lines across the river. Its unusual double-decker design later served motor vehicles on the lower deck while trains continued to rumble above on the upper deck. The bridge closed to rail traffic in 1980, vehicle traffic in 1999. In 2008, a 200-foot segment of the eastern span of the bridge collapsed into the riverbank and the remaining bridge spans were scheduled for demolition. State legislation in 2009 spared the western bridge spans from demolition. In 2010, the remaining sections were turned into a recreational pier and city park.