Arrests Made in “Smash and Grab” Cases 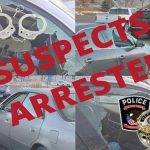 On Monday morning, four vehicles located in parking lots of Cottage Grove businesses were broken into, after suspects smashed car windows. Thanks to a quick call from two of the victims, Cottage Grove Police Officers were able to view video, track stolen credit cards, and identify two adult male suspects. According to a post by the CGPD on social media, officers tracked down the suspects Monday afternoon. After initiating a traffic stop, one suspect fled in a vehicle to a home in St. Paul Park. Shortly after, both suspects were arrested at the home and all of the stolen property listed on the search warrant was recovered. It will be returned to the rightful owners soon. At this point, investigators are working to see if a few similar cases of “smash and grab” witnessed a couple of weeks ago are connected to Monday’s crimes.

Permanent link to this article: https://kdwa.com/2021/01/arrests-made-in-smash-and-grab-cases/