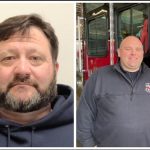 The City of Hastings Public Works Department has announced the hiring of Shawn Shorey, as a Building Inspector for the City. Shawn joins the City from Colorado, where he worked as a multi-trade building inspector for the University of Colorado in Aurora. He has been a licensed plumber for more than 20 years. The City has also named Fire Captain Jamie Stevens as the City’s new Fire Inspector. He started his new role on Monday, May 2. Jamie came to the City as a firefighter in 2012 and was promoted to Captain in 2015. He will work closely with Fire Marshal Al Storlie in compliance, enforcement and interpretation of fire codes, as well as overseeing rental inspections.

Permanent link to this article: https://kdwa.com/2022/05/hastings-announces-new-inspectors/