The Hastings Raiders hockey team was feeling great heading into the second intermission. The Raiders had just played the period of their early season, and Kody Niederkorn had delivered several crazy saves, including an early candidate for the save of the year. Then Hill-Murray struck back, scoring three goals in the third. But the loss certainly didn’t feel like one as the fans filed out of Hastings Civic Arena. Hill-Murray, a team who in the past would bowl ever anyone in Metro East, faced a determined Raider team looking to make a statement against a team that got to go to Saint Paul last season. The Raiders went down early, as Hill-Murray would score just 5:39 into the game to make it 1-0. But the Raiders would respond, with Brody Larsen scoring from Mark DeNoyer at 11:45 to even it up 1-1. Hill-Murray scored very quickly into the second to make it 2-1, but then Niederkorn then put on a show in the second period, making several key saves to keep Hill-Murray from expanding the lead. The Raider netminder got help, when Austin Shanks scored from Sawyer Zaruba and DeNoyer and it was tied 2-2 after that aforementioned second period. Hastings would take their first lead in the third period, when Larsen scored from DeNoyer just 27 seconds into the period to make it 3-2. The Raiders then went into an aggressive defense, but it was a lapse in defense that led to Hill-Murray’s tying goal. All five Raiders were in the offensive zone, and an errant pass led to a Pioneer scoring to tie it. 30 seconds later, the dam broke, and Hill-Murray scored again to make it 4-3. Hastings would press late, but the final goal would come on an empty net to make it 5-3, making the score look worse than it actually was. Niederkorn made 41 saves on 45 shots, with two of those goals seemingly being fluky goals. Larsen’s two goals led the team offensively, but DeNoyer had 3 points, all assists, to lead the team in points. Shanks’ goal along with Zaruba’s assist completed the statsheet offensively for the Raiders. Hastings returns to action with a Thursday/Friday doubleheader ahead of the Holidays, with a game at Dodge County on Thursday night, followed by a game against Rochester Century on Friday afternoon. This game was scheduled to be played last week, but was moved to this date due to the Raiders already being in the area. Hastings originally intended for this schedule, but the game was moved earlier, and with the weather postponement, it was moved back. 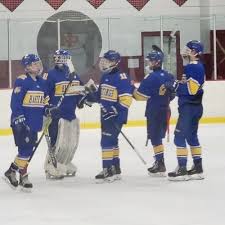 Permanent link to this article: https://kdwa.com/2022/12/raiders-rattle-hill-murray-but-fall-short-of-victory/