Norring Named To VOID Board Of Directors 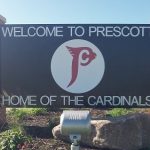 The City of Prescott currently receives $10,000 in funding from the Prescott School District to help fund the School Resource Officer (SRO), which helps provide the school a sworn law enforcement officer trained in school-based crisis response and law enforcement. According to City Administration, a current gap in funding the SRO results in the City subsidizing a large portion of the work. The current SRO is also the City of Prescott Investigator and splits his time between both the SRO work and investigative work. Generally, there are 36 weeks in a school year and with benefits the SRO costs around $42.60 per hour. The SRO spends about 20 hours a week assisting at area schools for a total cost to the City of $30,672. The City has been in discussions and has negotiated a new agreement regarding the SRO position that increases the amount of pay to $26,001. Additionally, the agreement has added language that splits the overtime that may be required because of special events or needs between the School District and the City. The Prescott School District reviewed the agreement at their June 15, 2022, meeting and approved it by a vote of 3-to-0. The Personnel Committee reviewed the contract and approved sending it to Council by a vote of 3-to-0. The City Council will consider the Contract at Monday evening’s meeting.

Permanent link to this article: https://kdwa.com/2022/08/prescott-city-council-sro-contract-negotiations/