Goodhue County Detention Deputies Hunter and Skyler Gratz, Brian Jensen and Nurse Beth Duffing were recently recognized for life-saving efforts they put forth at the County Jail last year. According to a GCSO press release, on August 18, 2022, a detainee was found attempting to hang himself in his cell. Assistance was immediately called for and when help arrived they lifted the detainee up, cut the sheet from around the detainee’s neck and the detainee was assessed. Life saving measures were quickly started on the inmate until medics arrived. The outcome looked very grim but it was later learned the detainee had survived. Because of the quick response and actions of the Deputies and Nurse Duffing, the GCSO is proud to present them with the Sheriff’s Office Lifesaving Citation. 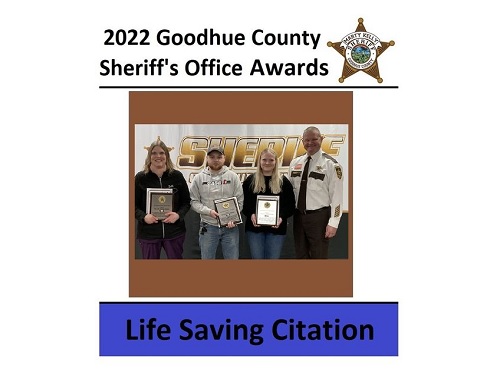 Permanent link to this article: https://kdwa.com/2023/01/lifesaving-efforts-recognized/